Mechanisms and functional role of sleep in memory and learning

During slow-wave sleep, the cortex is decoupled from sensory inputs, and can be devoted to consolidating previously acquired labile memories into stable memories. The goal of our research is to combine animal, human and computational works to explain mechanisms of sleep rhythm generation and how sleep rhythms contribute to memory consolidation. 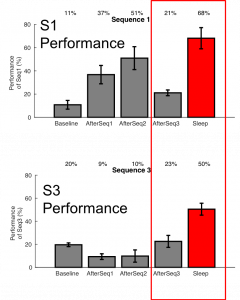 Continual learning remains to be an unsolved problem in artificial neural networks. Biological systems have evolved a mechanism by which they can prevent catastrophic forgetting of old knowledge during new training and allow lifelong learning. Building upon data suggesting the importance of sleep in learning and memory, we test a hypothesis that sleep plays a role in protecting memories from catastrophic forgetting. We found that training in a thalamocortical network of a “new” memory that overlaps with previously stored “old” memory results in degradation of the old memory. Simulating sleep state immediately after new learning led to replay of memories, which protected the old memory from forgetting and ultimately enhanced both memories. We show that slow-wave sleep results in the fine tuning of synaptic connectivity to allow for the same population of neurons to store competing memories without the need of explicit retraining of previously stored memory sequences. Our results predict that oscillatory activity in the thalamocortical network during sleep reorganizes synaptic connectivity to maximize separation between groups of synapses responsible for conflicting memories that reduces interference and enables brain networks to undergo continual learning.

We develop a new computationally efficient approach to analyze large-scale networks of biological neurons. This approach is based on using difference equations (map) for simulation of neuron dynamics. The nonlinear maps produce very rich spectrum of dynamical behaviors while remaining simple and low-dimensional systems and, therefore, can be very computationally efficient. Conventional approach based on simulating ordinary differential equations (such as Hodgkin-Huxley type models) quickly reaches its limit when the number of elements in the network increases. It makes this approach impractical for studying those problems when the analyzed phenomena originate from a collective behavior of large neural ensembles. A map-based model of a neuron that realistically replicates the dynamical mechanisms underlying both its spiking and bursting activity and correctly captures the input-output processes opens new opportunities in the studies of large-scale network functionality. This approach will provide the basis for network simulations of different brain systems, including hundreds of thousands neurons, at the realistic time scales using conventional workstations.

Mechanisms of ripple generation and sequence replay in the hippocampus

Among hippocampal-specific activity patterns, sharp-wave ripple complexes are brief high-frequency events, during which the firing sequences of previously activated cells are re-played. It is believed that sequence reactivation during ripples contributes to memory formation in awake patterns and to memory consolidation during sleep. Ripples in the pyramidal layer of hippocampal area CA1 are thought to be triggered by a generalized excitatory event in area CA3.

We develop computational models of ripple generation to explore hippocampal sequence replay during sleep. In our model, perisomatic interneurons are organized in brief oscillatory transients by common excitation, and such high-frequency firing mediates high-frequency LFP oscillations in pyramidal neurons. Pyramidal cells are then firing within the windows of opportunity left by the inhibitory activity. We hypothesize an essential role for axo-axonic cell activity in regulating sequence replay.

Sleep is critical for regulation of synaptic efficacy, consolidation of memories and learning. We develop thalamocortical network models of the slow-wave sleep activity characterized by repeatable (< 1 Hz) transitions between active (Up) and silent (Down) states of the network. Spike-timing dependent synaptic plasticity is implemented to regulate synaptic efficacy, which is associated with the sequence replay. We study how interaction between cortically generated slow waves and sparse external input, possibly representing input from hippocampal formation, may lead to reorganization of synaptic strength during stage 3/4 sleep.

Although the studies report that individual sleep features correlate with improvement in specific memory domains, we do not know to what extend manipulating these sleep features will lead to changes in these precise memory domains.  Using human EEG data, pharmacological interventions and sophisticated signal processing we investigate the specificity of sleep-dependent memory.